Law which impacts directly on schools arises from a number of sources including: 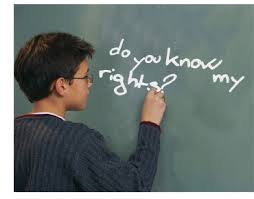 In addition, schools must follow procedures set down in various circular letters from the Department of Education and Skills, the Rules for National Schools where not superseded or replaced by legislation.

The Board of Management as employer is obviously bound by the raft of employment legislation which directly affects employers in Ireland.

When a problem occurs in or in relation to your school, you have a qualitative decision to make: is the problem sufficiently serious to necessitate seeking legal advice.

Provided the school’s policies and procedures were followed, and these comply with the law and Departmental guidelines, it may not be necessary. However, you do need to be mindful that problems, which initially appear to be minor or innocuous, can blow up into more serious difficulties for the school if the principles of natural/constitutional justice are not followed.

Put simply, these principles are a guarantee of basic fairness of procedures.

One of the areas of law which affects schools most frequently is employment law.

Employment law in Ireland can be quite complex due to the huge body of law which affects employers in Ireland.

The Board of Management as an employer of teachers, special needs assistants, caretakers, secretaries, etc. faces an onerous task. Departmental circulars, employment legislation, common law, and any agreements with trade unions need to be borne in mind in relation to employment issues.

The Education Act, 1988 makes provision for ‘the education of every person in the state, including any person with a disability or who has special education needs..’

Section 15, Education Act, 1988 sets out the functions of the Board of Management:

Section 7, Education Act, 1998 sets out the functions of the Minister which include:

The functions of the school are set out in section 9:

(d) publish, in such manner as the board with the agreement of the patron considers appropriate, the policy of the school concerning admission to and participation in the school, including the policy of the school relating to the expulsion and suspension of students and admission to and participation by students with disabilities or who have other special educational needs, and ensure that as regards that policy principles of equality and the right of parents to send their children to a school of the parents’ choice are respected and such directions as may be made from time to time by the Minister, having regard to the characteristic spirit of the school and the constitutional rights of all persons concerned, are complied with,

Code of Behaviour in Schools

Section 23, Education (Welfare) Act, 2000 sets out the school’s obligations in respect of a code of behaviour for schools:

It is worth noting that the Principal may make it a condition of enrolment that the parents confirm in writing that the code of behaviour is acceptable to them.

Note what the Courts have had to say in relation the enforcement of discipline in schools in Murtagh v Board of Management of St Emer’s National School [1991] which was a High Court case appealed to the Supreme Court:

The enforcement of discipline in a school is a matter for the teachers, principal, chairperson of BOM & the Board itself; not a matter for the courts whose function at most is to ensure that the disciplinary complaint was dealt with fairly.

21.—(1) The principal of a recognised school shall cause to be maintained in respect of each school year a record of the attendance or non-attendance on each school day of each student registered at that school.

Information from Schools to Parents

A number of acts place obligations on schools in relation to providing information about pupils:

However, schools need to be aware that bodies with which you may share information such as the HSE and the Department of Education and Skills are subject to FOI legislation so information shared with these bodies may be made available by these bodies.

Health and safety legislation in Ireland is extensive and detailed with the Safety, Health and Welfare at Work Act, 2005 being the most important piece of legislation.

Schools have a duty of care under common law to staff and other persons who may come into contact with the school. Schools also have  duty of care to pupils as they have been held to act in loco parentis.

However, schools need to be careful that their refusal to admit a child is essential to maintain the ethos of the school.

The Equality Tribunal has indicated that proving that one child’s admission to a school could disturb or threaten the religious ethos could be problematic, depending on the circumstances and facts of the situation.

Enrolment in a school can only be refused in exceptional circumstances.

And these circumstances need to be truly exceptional.

An appeal to the Secretary General of the Department of Education and Skills under section 29, Education Act, 1998 is open to the pupil’s parents (or to the pupil if he/she has reached the age of 18) or to the National Education Welfare Board.

Children with special educational needs enjoy the presumption of mainstreaming and schools are obliged to make reasonable accommodation for such pupils. Schools would also be expected to seek and avail of the necessary supports from the State.

Schools can only exclude such pupils where the provision of education to other pupils is rendered impossible.

Section 14 sets out the duty of schools:

Section 4 of the Act provides for assessment of a child by the HSE or the National Council for Special Education. Parents can be compelled a Circuit Court order to have their children assessed.

When a school communicates its decision to the parents which gives rise to an appeal, the parents must be advised of their refight to appeal under section 29.

Prior to the hearing of any appeal, there is a facilitation process, which generally lasts for around one week, which aims to reach agreement at local level.

Factors which may be considered by the Appeal Committee include

The decision of the Appeal Committee is binding on the Board of Management.